What a couple of weeks off work - I don't think I have ever been so busy!

It was the last weeks of the school holidays so we were out a lot at the museums and art galleries of Manchester - they were fabulous places, full of interesting things.  Even better - they are free to get into!  We were also wandering around parks and playing football and seeing friends and family.

My wife and I celebrated our 2nd wedding anniversary and our babies 1st birthday - I can't believe how time is flying! I made a plain cake for the actual birthday and a more 'special' one for a get together at the weekend.  I decorated it based on the Mickey Mouse Clubhouse: 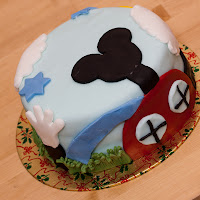 I also took some photographs of the twins of some friends - they had 2 gorgeous baby girls about 4 weeks ago now, and I got a lot of great pictures - I have seen loads of positive responses to them...

They were bought a package gift for a professional photographer to go round to their house and take some shots too, and they were good enough to invite me along to stealthily pick up a few hints and tips to help me in the future.  I picked up a few so am grateful for the invite

I think I took over two thousand photographs over those 2 weeks, which I have yet to fully work through.

Another highlight of mine was appearing on North Manchester FM radio on the 29th of August, to talk about my family life and photography - I owe a huge thanks to Rev Dave Gray for the invite, and to my wife for the push to agree. I had a great time and was worried that I wouldn't have a lot to say, due to my shy and retiring nature... But I think I managed to talk for a while.  And typically, when I got home I thought of loads more things I should have talked about.  If you want to have a listen to the show, you can get to it here:

I appear in the show from the 29th of August.

Back to work this week, and getting the family back into the old routine...  Hopefully in the next couple of weeks, I'll have the time to work on some more art at home.

I am going to be on the radio!!

Next Wednesday night I'll be chatting with Rev. Dave Gray, about the family, life, and my 'art'!  Dave is a friend of the family who officiated at my daughter's naming ceremony earlier in the year.  It was such a special day...

While I am looking forward to appearing on Dave's show, I am a little concerned about the amount of talking I'm going to have to do.  Anyone who knows me will know it's hard enough to get 2 words out of me (without a whisky or 2...)  I suppose it's good that I am talking about the main loves in my life - my wife, kids and photography (in that order!).  I think I might also be able to choose the sounds - it'll be a bit like my own desert island disks!

Hope to speak to you then, Pop-Pickers..

Alan
Posted by Unknown at 13:53 No comments:

I'm on holiday - I haven't gone anywhere, just taking a couple of weeks off work - and I haven't stopped!!

My wife and I celebrated our second wedding anniversary, which was really nice.  We went to the Ash Tea Rooms in Heaton Chapel/Norris.  It's a really nice atmosphere there, very chilled out.  We had some breakfast and a cream tea, and spent some time with our daughter Emily in the garden and had some fun on the swing...

On Saturday afternoon we went to see some friends who had twin girls a few weeks back so I could take some photographs of them with parents and a grandparent.  The weather was great so we could do the 'shoot' outside.  I ended up with loads of pictures, but I have yet to sort through them properly what with everything else going on.

Sunday, we went to visit my sister in law.  We had a brew and a good old chin wag, and were trying to tempt Emily to walk for her Aunty again, but she was having none of it.

Monday was our actual anniversary, and we took the kids to the MOSI, and had loads of fun.  We went round the Experiment centre in the main building and had an ace time playing with music, bubbles,  and loads of other great stuff. I was playing with all the little puzzles they had out - Tangrams, pyramid puzzles, etc - I love that kind of thing to keep my brain active.  We went round the power and air/vehicle centres too.  It was a good day, though tiring...  Lots of photos to sort again...

Today is Emily's first birthday.  We were up early and had all her prezzies laid out, and I took one or 2 (*hundred*) photographs.  I made a cake for today and have made the bases for the cake for the weekend, when we are meeting up with our families and friends who want to wish Emily a happy first birthday.  I have also made a few cookies today that I am going to practice icing with, so it's all go.

I hope to have the new photographs up on my Flickr page (there's a link to it the right somewhere) when I have a few hours spare to sort through them all.

I also hope to get hold of a fish tak soon so I can start working on some new arty stuff.  I have joined local 'Freegle' page where you can get people's junk to see if I can pick one up for nothing, but no joy yet..  I'll be keeping my eyes open. (Thanks Chris for the tip there, I'll e-mail you when I get a few minutes  :o)  )

Hope all is good where you are

Alan
Posted by Unknown at 13:31 No comments:

And now for something a little bit different

I have been thinking of some different things to photograph that can be done from home.  One of the main things I need to consider is doing things on a budget, so I need to do this kind of thing as cheaply as possible, and anything I buy needs to be reusable.

My aim is now to get some money together and get a cheap fish tank, a pipette and some things to mix and recording what happens...

Anyway, for now here is an idea of what I am talking about, please let me know what you think, and if you have an ideas for me to try please leave then in a comment.

To give you a taste..

of what you're missing if you haven't been to see my show.  Here are the images in my currently displayed collection.  It'll be on the wall at the Brooklyn Pottery shop at 104 Shaw Heath in Stockport, for a little while longer, so please go and have a look if you have the time.

All pictures are A2, and available framed (in clip frame) for just £30.

It came and it went well... and relax

Well, last Sunday saw the pinacle of the stress mountain that was the gallery showing my artwork at the Brooklyn Pottery studio in Stockport.

It was a fabulous afternoon, and loads of friends and family came to see the work I have chosen to display.  I was immensely touched by the number of people who turned out.  Thank you so much, everyone (I hope I didn't mither you all too much). 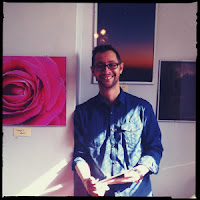 (I don't know what's going on with the teeth - look like I have a huge gap!)

Also on the day was some live music in the pottery studio downstairs, a lovely buffet spread with the odd bottle of wine and beer (so I am told - I never saw any of it!) out in the newly landscaped/designed garden area (generously provided by the Prince's Trust).

I had a few people asking me questions about the work I am displaying, and I even sold a couple of pieces, which is a huge bonus for me.  I hope that people take some of the contact details I left and get in touch to buy more of the work.

The work will be staying up for a while yet - so get yourself over there and have a look.  They serve great coffee, and you can even paint some pottery while you're there and very reasonable prices, so there are many reasons to look....

I am hopeful that I will be able to do another collection in a few months time - but I need to have a chat with the Brooklyn folks to see if they want me to....  I'll keep you updated.

In the meantime, I am going to be working on some new things, which I'll be writing about soon.

Well, it won't be long now.  Getting nervous about the whole thing, hoping I have picked the right pictures, hoping people like them, hoping people want to buy them....

Hope to see you there 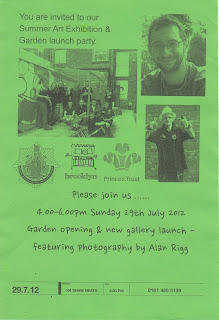 After this event, I am hoping to start working on some other arty stuff involving water, food colour, milk, etc...

Watch this space
Posted by Unknown at 10:28 No comments: